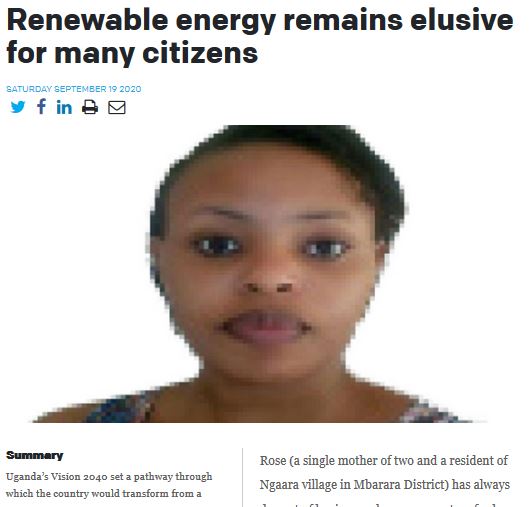 Rose (a single mother of two and a resident of Ngaara village in Mbarara District) has always dreamt of having a solar energy system for her home. However, with her limited income and surviving on the margins, her dream remains just that – a dream.

“I am faced with the struggle to find money for school fees for my two daughters. I am not even able to provide two meals each day for my family! How can I think of a solar system that requires Shs200,000. Yes, we need light in our house for my children to use, but the only option is a kerosene lantern,” she says.

Rose is among millions of Ugandans, especially in rural areas, where access to hydro power is still limited due to its high cost, who are seeking efficient and affordable clean energy in their homes, but can’t also afford the modern clean renewable energy, because it is still out of reach. Renewable energy technologies, particularly solar power, are meant to provide rural communities with cheap, clean, efficient and healthy alternatives, but remain out of reach for most of these communities.

Solar energy can be used for cooking, heating as well as power, which can reduce the dependency on firewood, charcoal, candles, and kerosene lanterns that are majorly used in rural areas.

However, despite its potential and all its wonderful benefits, its use is still limited! One of the major constraints is the initial cost of installation besides lack of knowledge about its benefits and where to access the genuine products.

There is also the issue of security of the panels, which must be kept outdoors where they can tap energy from the sun. Although access to renewable energy alternatives, especially for the rural poor, is the United Nations desired goal in efforts to stem global warming and deadly gas emissions, many communities are still unable to access them because of the related high costs.

Sustainable Development Goal 7 (SDG7) focuses on ensuring affordable clean energy for all. It also focuses on improved access to clean and safe cooking fuels and technologies for three billion people. Furthermore, it seeks to expand the use of renewable energy beyond the electricity sector, and to increase electrification in sub-Saharan Africa.

In this region, more than  789 million people are living without access to electricity. Worse still, those who have access, only have limited or unreliable electricity supplies. Yet electricity is key to keeping people connected at home, run businesses and keeping many sectors operating efficiently.

In Uganda,  current World Bank statistics show that only 42.7 per cent of the urban population have access to power. The largest population in rural areas, still depends on biomass as their source of fuel (in terms of charcoal, firewood, and plant residues) while a few have solar.

Uganda’s Vision 2040 set a pathway through which the country would transform from a lower income country to a middle-income country focusing on the energy and mineral development sector as the key drivers to attaining this desired goal.
The government also looks at other projects such as a H-tech ICT city, with related infrastructure, large irrigation schemes, industries, standard railway gauge network, technology parks and many more of which require affordable and sufficient energy to run .

This further confirms the importance and need of sufficient and affordable energy alternatives in the entire country.

The main source of energy for large scale projects is still hydro electric power. But it doesn’t reach all parts of the country due to high transmission costs and the need of expensive infrastructure. In these sparsely populated rural settlements, leaving them with solar energy is their best option.

Terms of Reference (ToRs) for Expert to facilitate the development of community by-law
for advancement of Toilet coverage in among Tenant’s community in Kansanga and
Kamyokya Parishes, Kampala City.