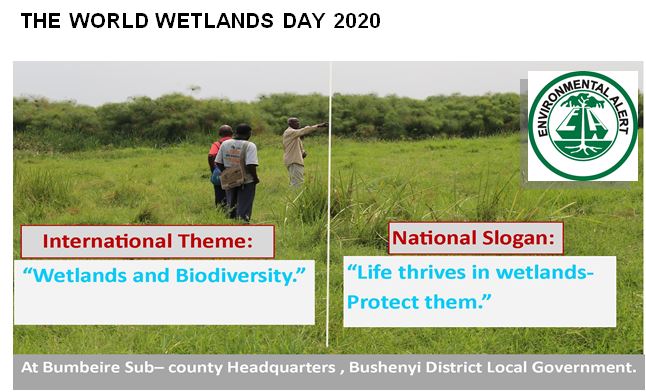 World Wetlands Day (WWD) occurs annually on February 2, marking the date of the adoption of the Convention on Wetlands on February 2, 1971 when a group of environmentalists signed an international agreement at the Ramsar Convention in Iran. WWD was established to raise awareness about the value of wetlands for humanity and the planet, and was celebrated for the first time in 1997 and has grown since then. Each year, government agencies, non-governmental organizations, and groups of citizens at all levels of the community have taken advantage of the opportunity to undertake actions aimed at raising public awareness of wetland values and benefits such as conservation (SDG Knowledge Hub 2020).

The broad aim of the convention on wetlands also known as Ramsar Convention on wetlands, is to halt the world wide loss of wetlands and to conserve them through wise-use and management. This initiative promotes the implementation of the concept of “wise use” of wetlands through strengthening the capacity of countries to manage their wetland resources in perpetuity and contributing to integrate wetland conservation and management with the development process.

The frequency of disasters worldwide has more than doubled in just 35 years, driven by climate- and weather-related hazards such as floods, tropical cyclones and droughts. UN-Water estimates that 90% of all natural hazards are water-related (Ramsar, 2017).

Wetlands have many roles they play in the world, and among these we have:

Uganda as a signatory to the Ramsar convention on wetlands will join the rest of the world to commemorate the World Wetlands Day on 7th February 2020, starting at 8:30pm at Bumbeire Sub-county Headquarters, Bushenyi district Local government under the theme “Wetlands and Biodiversity,”. The national slogan is “Life thrives in wetlands- protect them”.

The main objective of the event is to raise awareness on the important roles played by wetlands in biodiversity management.  In this regard, the Ministry of Water and Environment has planned various activities to mark this occasion at the National and Local Government levels countrywide. The Ministry has called different stakeholders including the Civil Society Organisation (CSOs) to participate in the event with a mandate to showcase environmentally friendly technologies, practices, and materials.

Environmental Alert observes that the global theme and the national slogan for the World Wetlands Day 2020 are well thought out and timely. This is largely because several wetlands in Uganda wetlands especially in the urban (such as Lubigi, Nakivubo, Kinawataka in Kampala; Mabamba bay Ramsar site in Wakiso and Mpigi districts; Kibingo, Kashasha, Bujaga, Kibuba-Kongoro, Rucece, Rubindi and Rushanje in Mbarara district; Namanve wetland in Mukono district) are under a very serious threat of total depletion and degradation (Zake, 2018). This is partly due to inadequate regulation of urbanization and industrial development. According to the Water and Environment Sector Performance Report 2018, currently the wetlands coverage is at 8.9% intact and 4.1% degraded and 2.6% completely lost (Ministry of Water and Environment, 2018).

The loss of the wetlands also means loss of the goods and services they provide. This has serious implications for economic development and sustainable livelihoods in the country. Therefore, the World Wetlands Day celebrations provide an opportunity for reflection and call for action for all Ugandans to be cautious of the decisions and actions they implement to ensure that they prevent adverse effects on the wetlands. Hence, all illegal activities in the wetlands should give way for wetlands reclamation and restoration; and any actions resulting in further destruction and degradation of wetlands should be avoided.

Environmental Alert  as a Civil Society Organization (CSO) will participate in the event and will showcase environmentally friendly practices, and materials for awareness creation containing information that promotes wetlands conservation and wise use.  Furthermore, Environmental Alert will support active participation of representatives of community wetland adjacent user groups and association during the celebrations event. Thus, they will participate in exhibitions during which they will interact with key duty bearers to share their experiences, lessons, concerns and recommendations to advance wetlands wise use and sustainable development at the community level.

To further advance wetlands restoration and wise use towards achievement of the 12% wetland coverage by 2030 as committed in Uganda’s Nationally Determined Contributions (Uganda NDC, 2015), the Environment and Natural Resources Civil Society Organizations (ENR-CSO) Network through their published ENR-CSO Network Position paper 2017/2018, outlined recommendations to the government through various line ministries to perform the following actions as shown:

Terms of Reference (ToRs) for Expert to facilitate the development of community by-law
for advancement of Toilet coverage in among Tenant’s community in Kansanga and
Kamyokya Parishes, Kampala City.